Did you know that the first video published on YouTube was only 18-seconds long?

Since launching in 2005, the video giant’s founders have learned time and time again that content doesn’t need to be long to engage audiences.

Now, following a five-month beta test — as well as the success of TikTok, Instagram Reels, and other viral video platforms — YouTube’s rolling out a short-form video feature of its own.

YouTube Shorts — a YouTube app feature that rivals TikTok and Instagram Reels — began its first round of testing in India last September. The beta feature enables users to see and create 15-second videos with musical overlays.

Even in its most basic beta form, the Shorts feature has already seen solid performance in India. In late February, Google and Alphabet CEO Sundar Pichai announced that videos on the India-based Shorts player receive 3.5 billion cumulative daily views.

Some YouTube app users in the U.S. have already started to see Shorts roll out on their smartphone app.

A recent post from YouTube’s Chief Product Officer Niel Mohan mentioned that the Shorts beta is expected to be fully released in the U.S. throughout March.

While there’s no word on a global launch yet, Pichai told the press, “We are looking forward to expanding Shorts to more countries this year.”

With YouTube Shorts’ U.S. launch upon us and a global launch likely in the near future, marketers are wondering how they’ll take advantage of this video feature, what the final platform will look like, if it will have similar virality to TikTok, and how it could help brands better engage with YouTube’s more than 2 billion active users.

The truth is, as short-form video platforms grow more and more popular, it’s hard to know which will rise above the others. And, because the YouTube Shorts could evolve between now and its full launch, we can’t fully predict what using it will be like in the near future.

However, because YouTube already houses millions of hours of branded content, YouTube Shorts could be worth your time — especially if you already have a video strategy on the platform.

Below, I’ll walk through the basics ofYouTube Shorts, and what opportunities it could provide for marketers upon its official launch.

YouTube Shorts enables users to produce vertical short-form videos, with features such as video-segmenting, app-based recording, and musical overlays. Videos must be 15-seconds or less and do not disappear like Instagram Reels or Stories content.

When explaining why YouTube decided to launch Shorts, a blog post from the tech giant read, “Every month, 2 billion viewers come to YouTube to laugh, learn and connect. Creators have built entire businesses on YouTube, and we want to enable the next generation of mobile creators to also grow a community on YouTube with Shorts.”

“User-generated short videos were born on YouTube starting with our first upload, a short 18-second video called ‘Me at the zoo.’ As technology advances, creators and artists can now take advantage of the incredible power of smartphones to easily create and publish high-quality content wherever they are in the world,” the YouTube post added. “People can be entertained and informed by bite-sized content in the spare minutes of the day. — That’s why we’re excited to announce that we are building YouTube Shorts.”

YouTube Shorts is currently in beta form for U.S. and Indian users as YouTube plans to add more features in the coming months. While we don’t know what Shorts will look like for certain when it moves out of beta, I took a few screenshots of the beta I recently discovered on my YouTube app to help marketers envision the potential user experience.

When Shorts is available, creators will likely be able to produce them by going to their home screen, tapping the “+” icon on the lower navigation, and selecting “Create a Short” from the menu that appears. Below is a screenshot from YouTube.

While this doesn’t seem to be available on the U.S. version yet, here’s what it looks like to other users who have the full beta.

When you tap Create, the Shorts creation interface will be similar to that of Instagram Stories in that it opens to a camera screen that allows you to:

While YouTube says it plans to expand on the features shown above, here’s a quick screenshot of what the platform looks like at the moment: 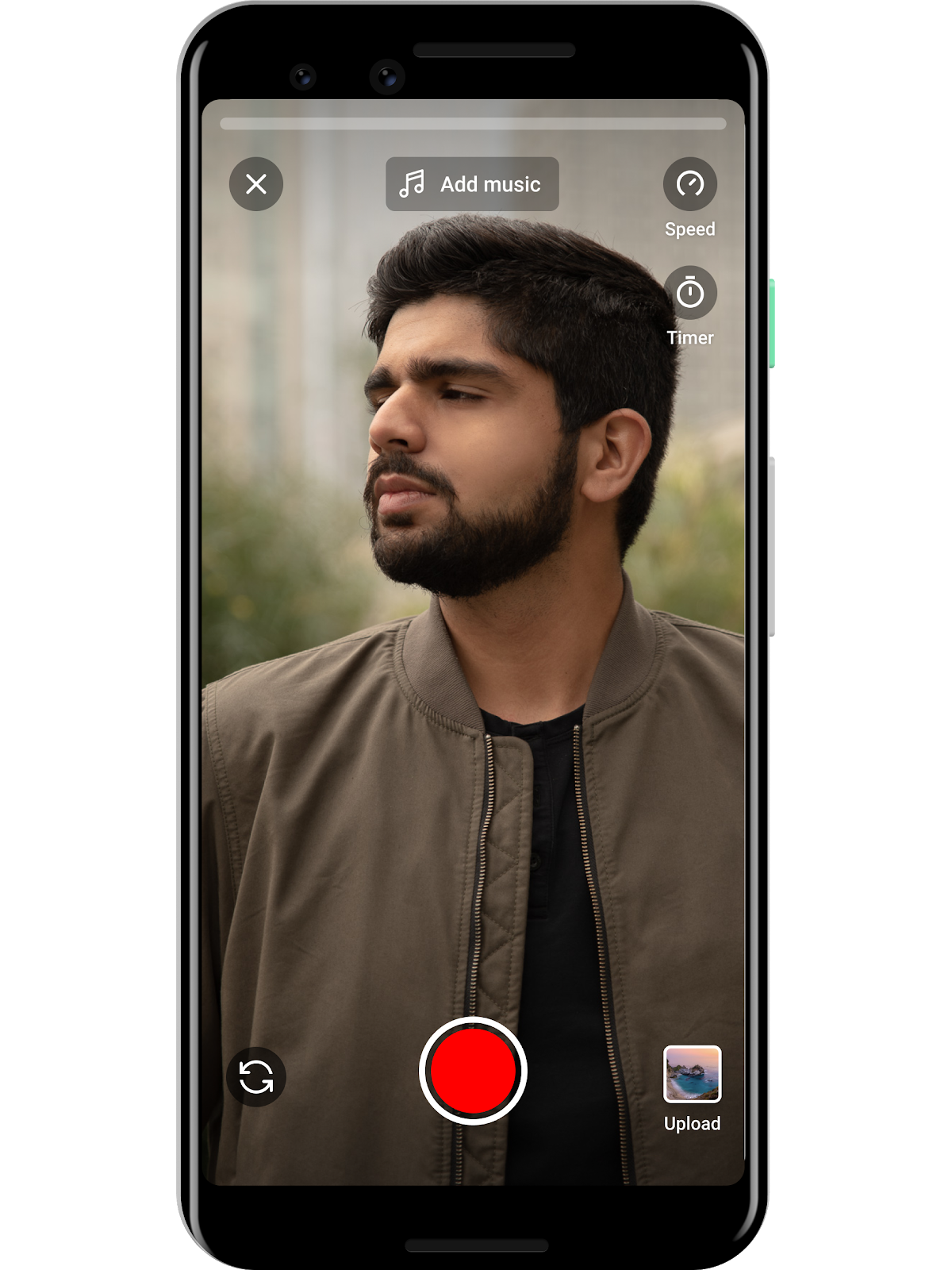 Before the Shorts beta test, YouTube had already been testing a section of its site where shorter videos were placed, shown below.

But, recently, YouTube added a dedicated shelf for the Shorts feature to its app homepage where you can start to view Shorts created by beta testers as well as short videos YouTube already had on the platform.

When watching a Short, viewers in India can tap icons on the bottom of the screen to “Like,” “Dislike,” or comment on the video. If they enjoy what they see, they can also tap the “SUBSCRIBE” to follow the video creator.

After a viewer finishes a Short, they can swipe their finger up — like on Reels or TikTok — to see a vertical feed of more Shorts from other creators.

As a marketer, seeing every social media platform launch Stories or short-form video features might be overwhelming. And, now that so many have come out, you might be asking yourself, “Will YouTube Shorts provide more opportunities than Instagram Reels or TikTok?”

Well, we still don’t know yet. However, we think YouTube Shorts will be worth watching. Here are a few reasons why.

Rather than wondering, “Will YouTube Shorts get awareness?”, you can ask yourself, “How do I tap into YouTube’s huge audience with Shorts?”

According to Nelson Chacon, HubSpot’s Principal YouTube Content Strategist, you’ll want to know which segment of YouTube’s huge audience you’ll want to market to before producing Shorts — or any other YouTube video for that matter. Additionally, if you have a solid subscriber list, you’ll want to continue to create content that’s still relevant to them — even if it’s shorter-form.

“Your subscribers know your channel for its content and Youtube, as a platform, works best with consistency,” Chacon says.

For example, if you regularly create long-form content related to your product or industry and find that it engages your audiences, Chacon notes that you can use Shorts to create “quick tutorials” or “step-by-step videos” around those content topics.

2. Brands in most industries could leverage Shorts.

Because TikTok has a somewhat niche user-base filled with younger consumers, some types of brands, such as B2B companies, might have a harder time growing awareness there. While YouTube shares similar popularity with young adults, the content on its huge platform is so vast that it brings in people from all sorts of age groups, countries, industries, and niches.

Ultimately, there’s a video for everyone on YouTube. With Shorts, more brands will be able to engage with audiences from a much wider range of audience targets.

For example, while a B2B brand might have difficulty connecting with Gen Z consumers on TikTok, they might be able to connect with professionals looking for industry-related content on Shorts. Similarly, if you target older generations, such as Gen X, your short-form content might get more engagement on YouTube than TikTok.

3. YouTube Shorts could be less vulnerable than other viral platforms.

This summer and throughout the fall of 2020, TikTok was threatened with bans and censorship regulations.

Why is this concerning? If you’re a marketer who spends time mastering content strategies on a social media app, a ban or regulation of that app could mean that the content you’ve worked so hard on might never be seen.

However, because YouTube’s one of the oldest and most successful online platforms, and it’s owned by the publicly-traded Alphabet, it might be seen as more trustworthy to governments around that world than viral apps that provide less public data security information — like TikTok.

For example, if a person who prefers short-form content stumbles upon your YouTube page, they can see all of your short videos, rather than only being able to access your longer content. Or, if someone’s in a rush and searching for a quick how-to video related to something you’ve filmed, they might find and watch your short videos on that topic — even if you published them months ago.

While we aren’t sure when Shorts will launch for all users, it’s not too early to consider how you could implement it into your social media or video marketing strategy. Here are a few quick tips to keep in mind.

To learn more about YouTube Marketing, check out our Ultimate Guide — or download the free resource below.