It’s hard to believe we’re approaching Labor Day weekend here in the U.S. — the unofficial “end” of summer — but alas, here we are, with another recap of the month’s top Google news items.

What You Missed Last Month in Google

Google globally rolled out a core algorithm update on August 1 — nicknamed, according to Search Engine Land (SEL), the “Medic Update.”

This week we released a broad core algorithm update, as we do several times per year. Our guidance about such updates remains the same as in March, as we covered here: https://t.co/uPlEdSLHoX

While Google hasn’t confirmed what percentage or type of pages have been impacted by the update, SEL’s analysis points to sites concerning health and lifestyle showing the greatest shift — specifically, those “that offer medical or health information that could impact your physical well-being” or “offering advice on major life decisions, such as pages on parenting, purchasing a home, a vehicle and so on.”

These are often referred to as “your money or your life” pages [YMYL], which Google’s search quality evaluator guidelines define as sites that “could potentially impact the future happiness, health, financial stability, or safety of users.”

Here’s a look at the top 20 “losing” sites following the algorithm — many of which offer alternative or so-called “natural” health advice: 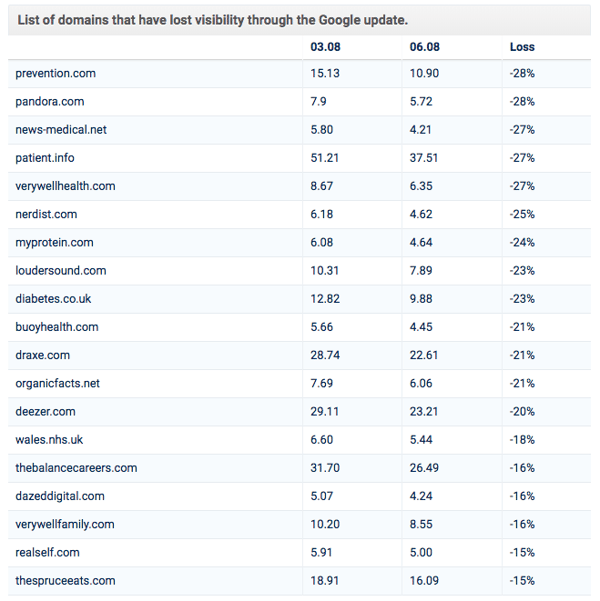 As with all of Google’s algorithm updates, the change was likely made to improve the quality of Google’s search results. Read full story >>

Larry Page, CEO of Google’s parent company, Alphabet Inc., has been formally invited by the Senate Select Committee on Intelligence to testify at a September hearing on foreign influence on social media.

Should Page accept, he will testify alongside Facebook COO Sheryl Sandberg and Twitter CEO Jack Dorsey on the topic.

This visit to Washington, D.C. is the latest for many Silicon Valley executives over the past year, especially since it was discovered that social media sites were weaponized by Russian actors to spread misinformation and influence the 2016 U.S. presidential election.

Since then, Facebook has uncovered similar election interference activity on its site — and all three companies (Google, Twitter, and Facebook) recently purged several accounts from their sites after discovering coordinated misinformation campaigns based in Iran.

Google has not yet confirmed if Page will appear at the hearing, which is scheduled for September 5. Read full story >>

Earlier this month, The Verge reported that Google is likely to release the latest generations of its Pixel smartphones — the Pixel 3 and Pixel 3 XL — and that it’s rumored to do so a major press event this fall.

But for reasons unknown, the Pixel 3 XL has been plagued with leaks ranging from product photos to an official “unboxing” video.

Why so many product launch leaks? Apparently, a number of units were stolen and sold on the Ukrainian black market for a cool $2,000 each. (The actual price of the Pixel 3 XL is yet to be determined, but the current generation — the Pixel 2 — currently retails for $649.) Read full story >>

Earlier this week, Google announced a number of updates to its Cloud Text-to-Speech and Speech-to-Text technologies — namely, that its WaveNet machine learning capabilities can now translate written text to spoken work 17 new (less robotic-sounding) voices, as well as new languages.

Another update: the ability of users to optimize the audio output for wherever it’ll be played — like speakers or headphones.

Want to take it for a spin? You can do so right here.

Meanwhile, with speech-to-text, TechCrunch reports that it’s now easier to transcribe multi-person conversations, like a meeting or conference where several people might be speaking at once. Those different voices can now be distinguished by the technology — as long as you let it know how many different voices exist within the audio sample. Read full story >>

With a simple command of, “Hey Google, tell me something good,” Assistant users can get the day’s roundup of positive news stories. (In its official statement, Google used the example of beekeepers who are helping to recover the bee population in Detroit.)

The stories are curated — from a vast range of news sources, the company says — by the Solutions Journalism Network, a not-for-profit organization with the mission of fighting “negative news fatigue.” Read full statement >>

See you next month, and until then — have a fabulous rest of the summer.