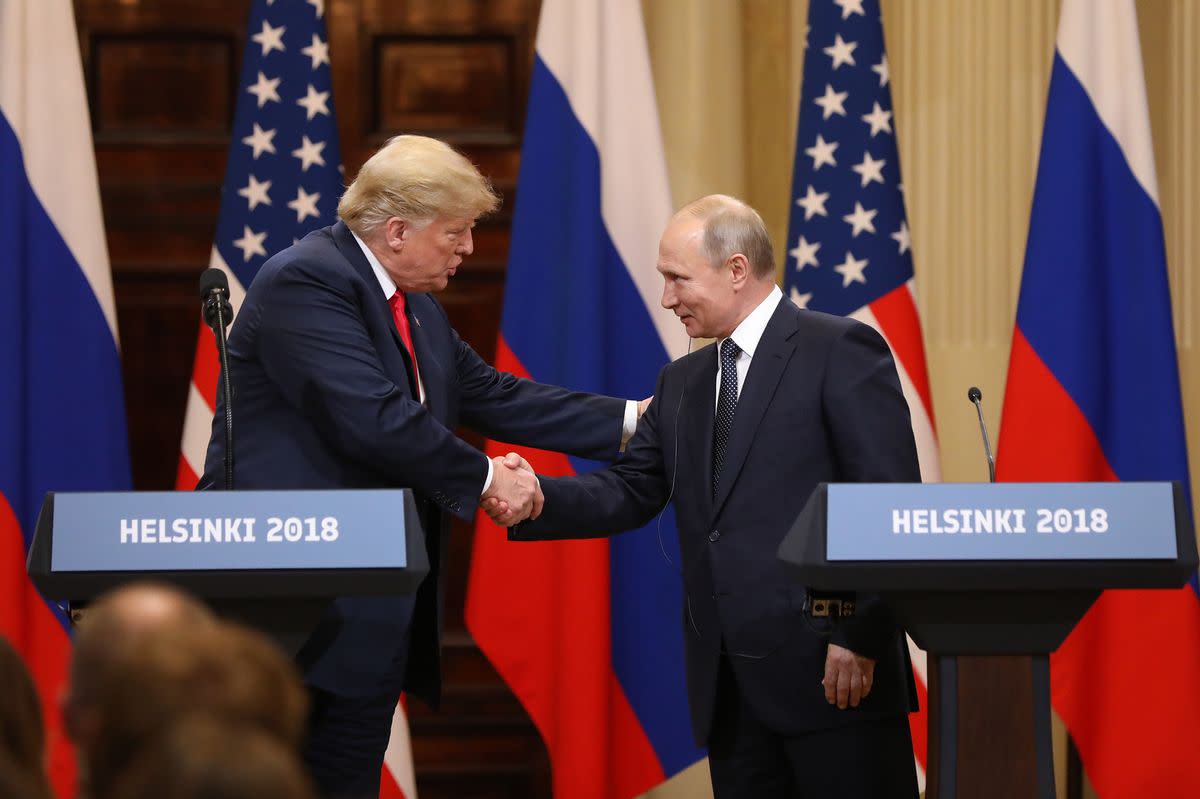 Donald Trump defended his handling of a meeting with Vladimir Putin after the U.S. president’s equivocation on U.S. intelligence agencies triggered the most intense backlash from Republicans of anything he’s done since winning election in 2016.

“While I had a great meeting with NATO, raising vast amounts of money, I had an even better meeting with Vladimir Putin of Russia. Sadly, it is not being reported that way – the Fake News is going Crazy!” Trump tweeted on Tuesday, the morning after his return from the meeting in Helsinki.

But the criticism was broad and bipartisan. Republicans who looked past the release of his recorded remarks about grabbing women and his refusal to denounce neo-Nazi protesters, or complained but took no substantive action when he imposed tariffs on allies, found their line in the sand after he sided with Putin against the U.S. intelligence community’s consensus that Russia interfered in the 2016 election.

“It is the most serious mistake of his presidency and must be corrected — immediately,” former House Speaker Newt Gingrich said on Twitter. Gingrich, who’s been a staunch Trump backer and whose wife, Callista, was named by Trump as U.S. ambassador to the Vatican, said Trump needs to clarify his statements.

More from Bloomberg.com: U.K.’s May in Brexit Turmoil With Parliament Majority Slashed

By putting Putin’s denial of election meddling on par with the conclusions of American officials as he did, Trump cut to the core of the Republican Party’s longtime identity, exemplified by President Ronald Reagan, one of its greatest heroes.

“I’ve never been more disappointed in my life,” said Representative Walter Jones, a North Carolina Republican, who has supported the investigation into Russian election interference and any links to the Trump campaign. “I called my staff and told them the ghost of Reagan is probably as mad as hell.”

More from Bloomberg.com: Trump Calls Mueller Probe ‘Disaster’ While Standing Next to Putin

The Constitution gives the president wide purview over foreign policy, but Congress has some levers to pull. For example, Senators Chris Van Hollen, a Maryland Democrat, and Marco Rubio, a Florida Republican, have introduced a bill that would impose stiff new sanctions if the director of national intelligence — not Trump — certifies Russia has interfered in a future election.

Yet it was unclear Trump’s performance changed the dynamics in the GOP-led Congress, with party leaders couching their disagreements in cautious terms to avoid confronting a president who remains popular with their base less than four months before the midterm elections.

Trump’s schedule for Tuesday includes a meeting with members of Congress without specifying the topic or the lawmakers who are being invited.

The criticism followed an internationally televised press conference with President Putin on Monday in Helsinki where Trump said, “I have great confidence in my intelligence people, but I will tell you that President Putin was extremely strong and powerful in his denial today.” Trump said he doesn’t “see any reason” why Russia would meddle and that the U.S. has acted in “foolish” ways in the past.

On Monday, separately from the Mueller investigation, U.S. authorities accused Mariia Butina, a Russian national, of trying to establish communications between American and Russian officials during the last election cycle.

“This will be one of those moments the long lens of history remembers,” Jolly, who represented a Florida district from 2014 to 2017, said in an interview. “We’ve never had reason to question a president’s patriotism. We question their competence, their judgment, their self-interest, their partisan motivations. Even with Richard Nixon we never had questions of patriotism like we are seeing today.”

Jolly said that for the first time he believes impeachment of Trump — or removal under the 25th Amendment by declaring him unfit — should be on the table. But, he said, “The fates of Republicans on the Hill are too tied to the president. I’m not optimistic that they will be independent.”

Trump seized on a sympathetic comment from Republican Senator Rand Paul in Kentucky, tweeting early Tuesday, “Thank you @RandPaul. “The President has gone through a year and a half of totally partisan investigations – what’s he supposed to think?”

The harshest reactions came from Republicans who’ve been critical of Trump, including Senators Jeff Flake and Ben Sasse of Nebraska. Senator John McCain, also of Arizona, called the news conference “one of the most disgraceful performances by an American president in memory.” He added, “No prior president has ever abased himself more abjectly before a tyrant.”

Some regular allies, such as Republican Senator Tom Cotton of Arkansas, avoided direct criticism of Trump but contradicted his assertion about U.S. intelligence findings.

Senate Majority Whip John Cornyn, a Texas Republican, said Trump “is trying to maintain some rapport with him, but clearly I disagree with Mr. Putin and I agree with our intelligence officials that they did attempt to meddle in the election.”

Cornyn later told CNN that senators were discussing a nonbinding measure that would reaffirm the chamber’s support for the intelligence community. “I don’t know what the president’s mental calculation was in giving Putin a pass,” Cornyn said.

Illinois Republican Adam Kinzinger, a member of the House Foreign Affairs Committee, said on CNN Tuesday suggested that Congress pass a nonbinding resolution to show symbolic support for NATO and for “reaffirming — however we want to word it — that Russia is an enemy or at least a competitor and that they’re doing really, really, really bad things around the globe and their’s no equivalency.”

At least one Republican saw Trump’s performance beside Putin as part of a deeper strategy. Representative Ralph Norman, a South Carolina Republican, said this was another example of Trump the businessman having an unconventional way of dealing with adversaries.

“I don’t look at his words, I look at what he does,” Norman said.

Despite the expressions of dismay, there was no indication of let-up by House Republicans in their effort to establish misconduct and bias in the FBI’s early investigation into Russian election interference.

Whether the Helsinki aftermath reverberates into the campaigns for the November election that will decide control of Congress remains to be seen. Trump has been adept at changing the subject of national debate with a tweet, and the Russia investigation hasn’t been near the top of the issues being discussed in the most closely watched House races.

Still, it will be difficult to erase the image of the American president, telling the world from Finland he was unconvinced of his own government’s conclusion that Moscow did indeed interfere in the 2016 election.

He told reporters that he gave at least equal weight to the assurances offered by Putin. He even praised an offer from Putin to work together to investigate the meddling as “interesting,” and appeared to entertain the Russian leader’s request to allow Russian investigators onto U.S. soil.

“I’m sick to my stomach — and I need your immediate $1 to win a Democratic House that will protect our democracy,” said Pelosi in an appeal sent out Monday night by the Democratic Congressional Campaign Committee. “I just watched Donald Trump stand shoulder-to-shoulder with Vladimir Putin, call Mueller’s investigation a witch hunt, and deny Russian interference in our elections.”

At least one Trump-state Democrat who has recently looked for opportunities to warm up to the president criticized him on Monday.

Indiana Senator Joe Donnelly, who faces re-election this fall in a state Trump won by 19 points, said in a statement that “when given the chance to stand up for our country and its security interests, President Trump instead emboldened President Putin and disregarded the consensus conclusion of the hard-working and patriotic Americans in the intelligence community, including Director of National Intelligence and fellow Hoosier Dan Coats.”

Republican strategist and pollster Whit Ayres said he wasn’t sure how the politics of Trump’s remarks would play out. “Based upon the job approval numbers thus far, Trump supporters are predisposed to believe what President Trump says.”

Siding with the president is an “easy call” for Republican candidates in states and districts where Trump enjoys majority approval, he said. But Democrats are making a play for control of the House by defeating Republicans in areas that are more closely divided.

“The challenge comes in states and districts where the Republican candidate needs all of the Trump voters plus a significant proportion of the people who do not approve of the president’s job performance.” Ayres said. “That becomes very tricky.”

And after a day of hullabaloo and disbelief on Capitol Hill, the House returned to session in the afternoon and cast votes on two bills to rename post offices in Missouri and California.

Read Trump’s Defense of Putin Proves Too Much for Some Republicans on bloombergpolitics.com