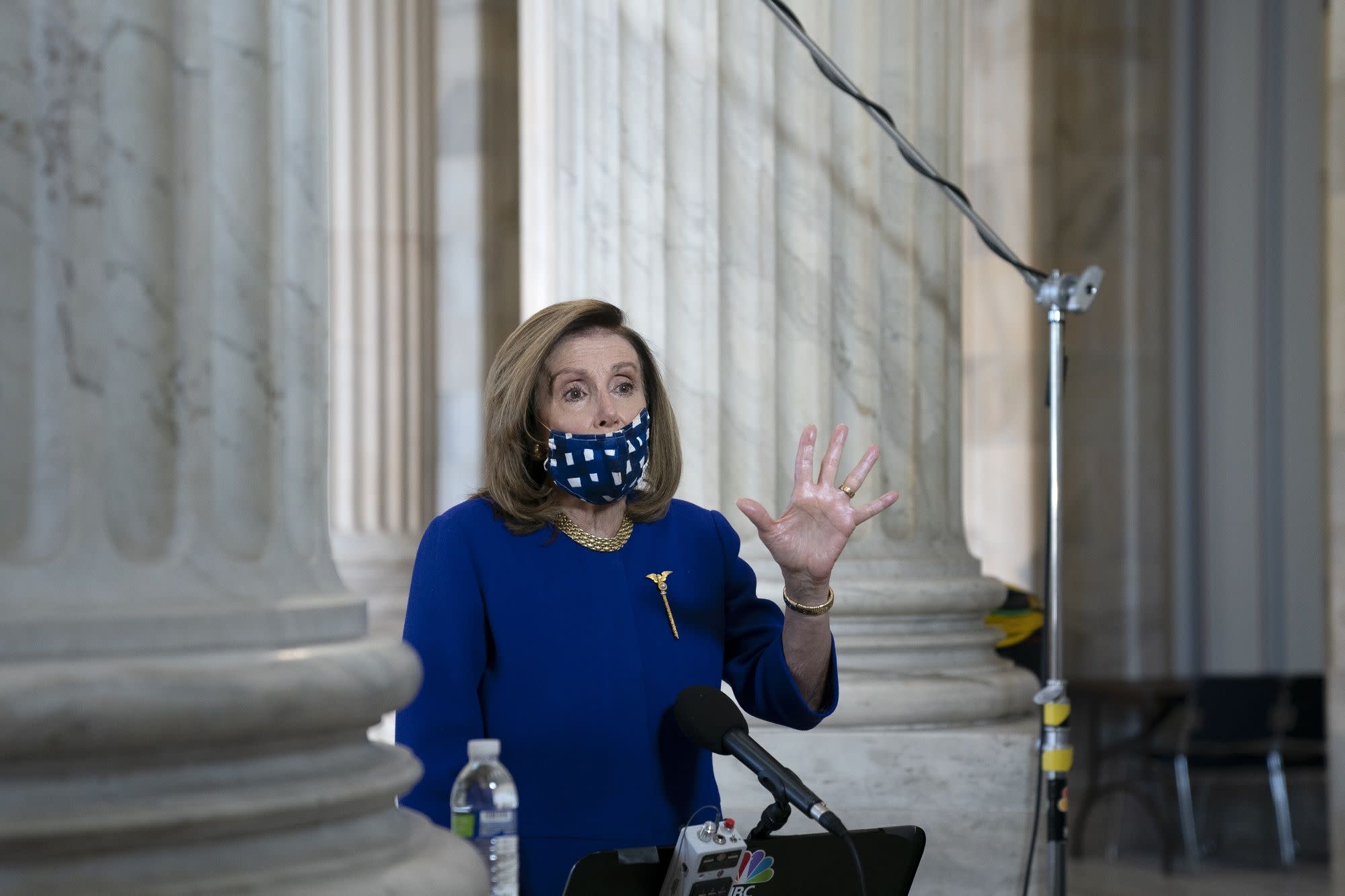 (Bloomberg) — Even with the U.S. still reeling from the coronavirus pandemic, Washington fell short in delivering more stimulus before the election, whipsawed by President Donald Trump and hobbled by the diverging agendas of the top Republican and Democrat in Congress. Now, voters will help decide what happens next.

House Speaker Nancy Pelosi, a self-proclaimed “master legislator,” entered the talks in July with a reputation for legislative acumen honed over years of consequential budget battles and in previous showdowns with Trump. She put in her bid for an even bigger pandemic rescue plan than the $2 trillion package passed in March.

Unlike in March, when both parties rallied around the Cares Act as the virus prompted nationwide shutdowns, the Trump administration couldn’t side with Pelosi even if it wanted. Senate Majority Leader Mitch McConnell and many of his fellow Republicans resisted any stimulus of much more than $1 trillion, and especially the massive state and local aid sought by Democrats. Some in the GOP didn’t think the economy needed more aid.

There also was a lack of trust in the White House negotiating team. Senate Republicans blamed Treasury Secretary Steven Mnuchin for giving away too much in the $2 trillion plan passed in March. Democrats were suspicious of White House Chief of Staff Mark Meadows, who joined the administration in March after building a reputation during more than seven years in the House as an uncompromising partisan.

Now there is less than three weeks before the Nov. 3 election, and Mnuchin said that “reality” is getting in the way. The Treasury chief said Thursday the administration is “not giving up” on a deal, although he’s planning to head to the Middle East next week.

The next steps will hinge on whether Trump is re-elected and the GOP holds on to its Senate majority or Democrat Joe Biden wins and Democrats sweep into control of both chambers of Congress.

“The root problem with reaching a deal is that neither party seems to feel that it will be blamed by voters for the stalemate,” said Sarah Binder, a political science professor at George Washington University and a senior fellow at the Brookings Institution.

For Trump, the idea of embracing the House Democrats’ plan — which began at $3.4 trillion in May before getting trimmed to $2.2 trillion by early October — was at odds with his narrative that the economy was rebounding handsomely. In August he claimed at a White House briefing the U.S. was leading the global recovery.

The president’s erratic moves since he contracted Covid-19 also served to undermine his own team. He took them out of talks on Oct. 6, only to send them back later the same week, calling for an even bigger package than the $1.6 trillion they had previously tried to sell to Pelosi.

“We need to get money to the American public now, the people that are most hurting,” he said early Thursday on CNBC, after the latest weekly jobless claims figure showed an unexpected deterioration.

Early, many investors and economists had penciled in a roughly $1.5 trillion stimulus from Congress. But the confusion of on-again, off-again talks, and an ultimately ineffective attempt by the White House at stimulus-through-executive-action, made the process unpredictable.

“It’s hard to know exactly what’s priced in” to financial markets, said Aaron Clark, portfolio manager at GW&K Investment Management. He said his best guess is that “there’s not much in the way built in for expectations for a package to take place by the end of the year.”

Now both sides are casting blame.

“I suspect that they don’t want to give the president a win three weeks before the election,” Mnuchin said of Democrats in a Wednesday evening appearance on Fox Business.

House Republican leader Kevin Brady was more direct. Pelosi has shown “her desire to not help this economy or anyone before this election,” he said in a call with reporters Wednesday. “Do they want to continue to sabotage this economy ahead of this election for their own political gain?”

Democrats naturally have a different take.

“The lack of a Covid package lies directly at the feet of Republicans. The White House has never been serious about this. The musical chairs of who is negotiating this is never ending,” said Representative Gerald Connolly, a Virginia Democrat. “Even the president in the haze of Covid therapy treatments has changed his mind about big, small, no deal at all.”

Pelosi told MSNBC on Wednesday night that while an accord remained a possibility, the two sides remained far apart on worker safety, school funding, and a strategic testing plan, among other issues.

She added that negotiations were continuing on a testing plan. “Tomorrow, we’re hoping to get better language back on how we crush the virus,” she said. Mnuchin said Thursday that he wouldn’t let testing be a roadblock to a deal.

Economic indicators since the summer have presented a mixed picture, allowing each side to paint a different narrative. Some sectors have done well, like a housing market that’s booming thanks to record-low mortgage rates in the wake of Federal Reserve easing. Trump and his aides have argued a V-shaped recovery is here, making the Democrats’ proposal excessive.

At the same time, the data show the recovery is already slowing. September saw the smallest gain in employment since a jobs rebound began in May. The U.S. is still down 10.7 million jobs from February, a bigger loss in payrolls than the 8.7 million seen during the 2008-2009 recession. A fall surge in Covid-19 cases threatens more economic damage. Fed officials have become increasingly clear in their calls for fiscal action.

Economic indicators in coming weeks could play into the likelihood of a deal during the “lame duck” period between the election and the inauguration of a new Congress and presidential term.

If Trump loses the White House and Republicans the Senate, it’s not at all clear that they will relent on a bigger stimulus that would give an incoming Biden administration surer footing on the economy. If they win there is little incentive to give Democrats anything.

If Democrats do sweep the elections, Pelosi could face a decision about whether to accept a smaller, interim package before a large-scale one early in 2021. House Majority Leader Steny Hoyer this week announced the House would return to Washington on Nov. 16 for its post-election session. Congress already has a Dec. 11 deadline to pass a bill to fund government operations, which could include some selected aid measures.

“A mini-deal in the lame-duck is most likely,” said Josh Huder, a senior fellow at Georgetown University’s Government Affairs Institute. He predicts legislation addressing narrowed targets with broad cross-party support, such as replenishing the Paycheck Protection Program offering aid to small businesses and supplementary unemployment benefits until February or March, along money for testing and tracing the coronavirus.

Senior House Democratic aides, asking not to be identified as talks between Pelosi and Mnuchin continue, agreed that a mini package could be possible en route to a comprehensive, signature Biden stimulus act in early 2021.

House Republican chief Brady agreed. “I hope that it doesn’t take until past the election but if it does I think the Dec. 11 date is the driver to get something to the president’s desk.”

The longer the wait until some fiscal help, the bigger the risk that a slowdown in the economic recovery causes longer-term damage.

“The most serious blow to the economy as the year ends will be the failure of Trump and Congress to agree on more help to those hit hardest by the pandemic,” said Mark Zandi, chief economist at Moody’s Analytics. “It is tough to see how the economy can gain any traction until next year when, we hope, the pandemic and election are in the history books.”

For more articles like this, please visit us at bloomberg.com