In as little as a few weeks, the story says, Waymo — which is owned by Google parent company Alphabet Inc. — will debut a commercial, self-driving car service that some have likened to ride-hailing companies Uber and Lyft.

The launch, if the rumors prove to be true, is said to be small, consisting of anywhere between “dozens or hundreds of authorized riders in the suburbs around Phoenix, covering about 100 square miles,” according to the Bloomberg story.

But it raises a question. Are we ready for self-driving cars to hit the road?

To find out, we asked 3,325 people across the U.S., UK, and Canada about their experiences with and expectations of autonomous vehicles. Here’s what they had to say.

Most People Have Not Ridden in a Self-Driving Car

Despite much of the excitement around them, autonomous vehicles remain a highly emerging technology. 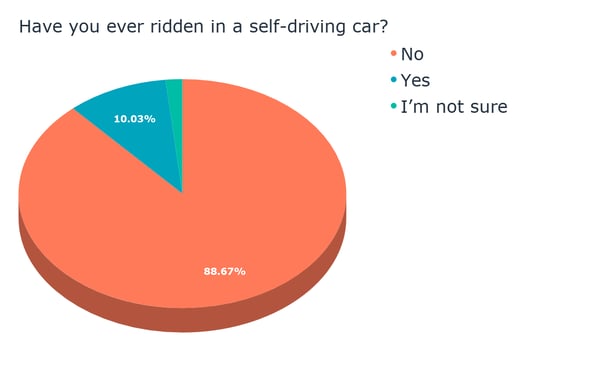 Within our survey, over 88% of respondents indicated that they had not yet experienced riding in a self-driving car.

However, despite most people not having ever ridden in a driverless car, many of them are curious to try. 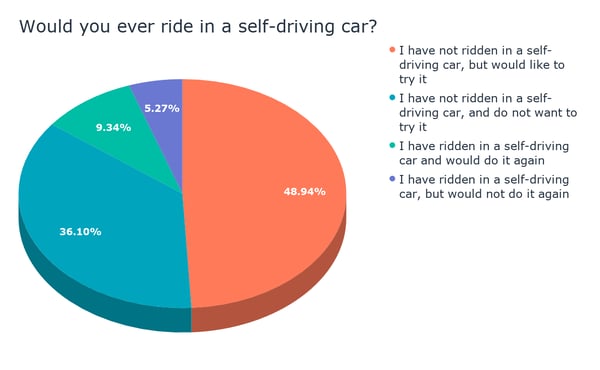 Nearly half of our respondents indicated that while they haven’t ever been in an autonomous vehicle, they’d like to try riding in one — suggesting that, once these cars do hit the road, the interest in experiencing them could help them go mainstream.

Self-Driving Cars Will Be a Dominant Form of Transportation, but Not for a While

We found that over three-quarters of respondents indicated that they believe autonomous vehicles will make up the majority of cars on roads — some day. 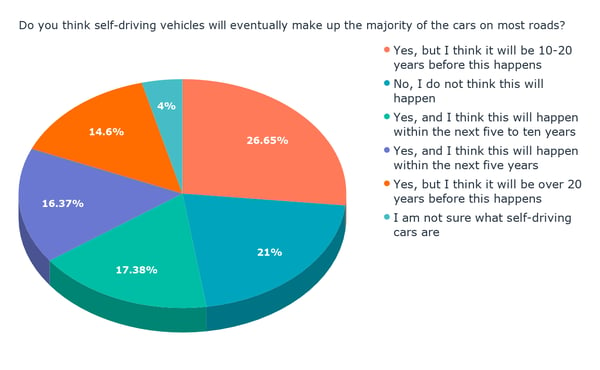 However, most believe that it might be a while before that happens, with the highest number of respondents saying that they believe it will be a decade or two until self-driving cars take over.

Despite the enthusiasm among respondents to experience riding in a self-driving car, few of them (about 17%) would describe autonomous vehicles as “very safe.” 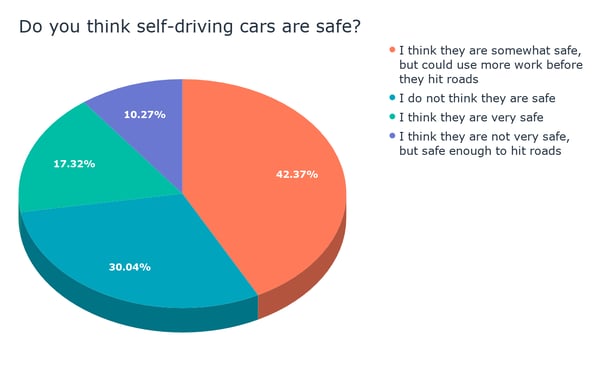 At the same time, most people agree that while there are still some safety issues to be worked out with self-driving technology, these vehicles are generally safe enough to be on roads.

Safety has been a significant part of Waymo’s message throughout its autonomous-vehicle-building journey. According to the Bloomberg story, for instance, the company said in a statement that “safety [is] at the core of everything we do.”

Approaching with caution can delay launches and slow the process of such a new technology going mainstream. Waymo’s own CEO, for instance, has remarked himself that he believes it will be “decades” before self-driving cars comprise the majority of vehicles on the road.

.@Waymo CEO John Krafcik says it will be decades before autonomous cars are all over the place, and there will always be some limitations to them, including geographically or climate. Not going to be fully autonomous in all conditions. @WSJ #WSJDLive pic.twitter.com/PehKCXlodw

However, Waymo’s “safety-first” mindset gives the company what some believe a positive, competitive advantage — especially when compared to some other autonomous vehicle makers.

Comparing @Waymo to @Tesla – Waymo’s AV strategy is focused on safety and long term. Tesla sees customers and everyone else on the road as research subjects. Waymo’s careful approach gets the lead for now. Neither designing for #pwd. https://t.co/40sfT8FWfP

But until this fleet of self-driving cars hits the road, and you’re curious to know what riding in one is like in the meantime — check out the story of our experience here.