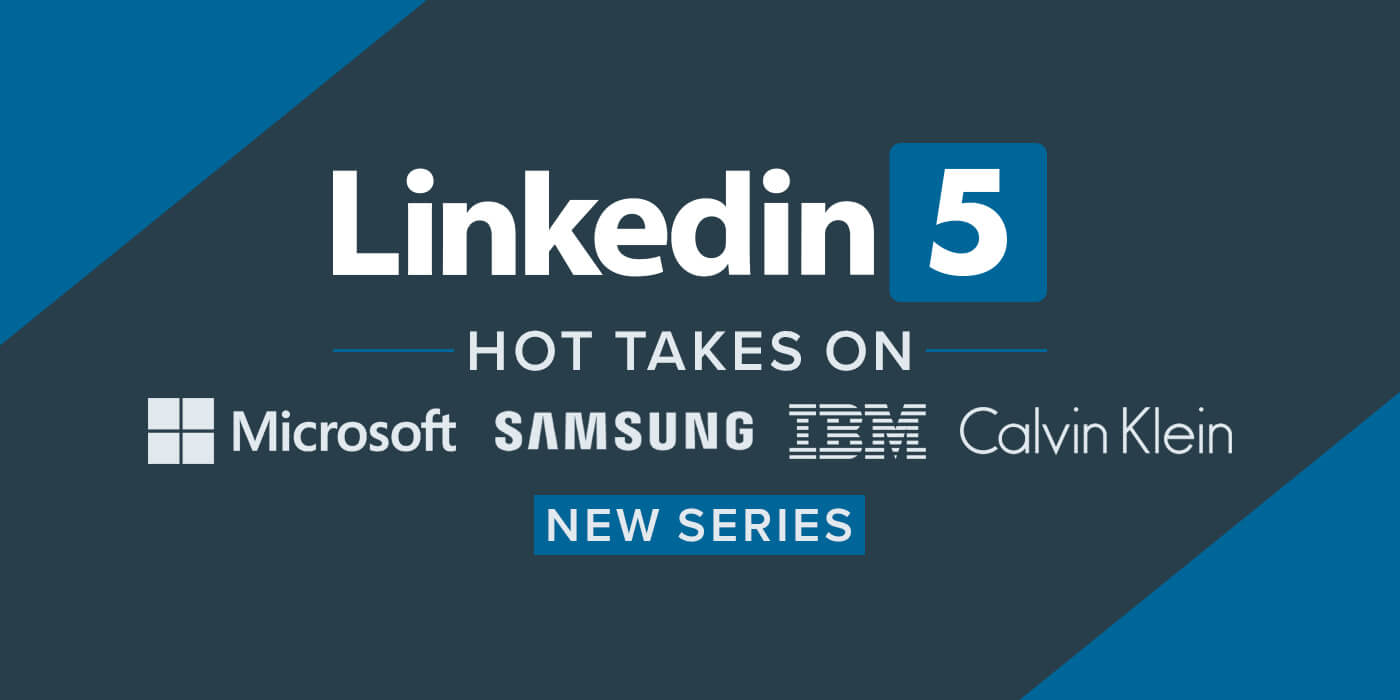 I’ve been brainstorming ways I can do more when it comes to sharing my thoughts and ideas about the business world – it’s something people have been asking me a lot about and it’s an area I want to talk about more.

The other day, I came up with a new content format to do this: I called it “Linked In 5.”

“Linked In 5” will be a bunch of quick, deep business hot-takes on what I see in the corporate world, marketing opportunities, new product categories that companies can get into, and more. Hope you guys like it and get value from it!

In this one I talk about some opportunities I see for Microsoft, IBM, Samsung, and Calvin Klein –

How Microsoft could be a significant competitor to Hulu

A few thoughts on Microsoft ….

I think Microsoft needs to look back at what happened with XBox when they went outside of where you expected them to go, and executed extremely well.

I think the acquisition of LinkedIn was a win. That’s a big reason why I think the company’s pretty hot – so right now if I were them, I would maybe look at OTT. Why can’t Microsoft be a significant competitor to Amazon Prime or Hulu? I think with a name like “The M”, they could be a huge OTT platform.

For example – when you own LinkedIn, you can do CNBC-like shows for just LinkedIn. When you own XBox, you can do original programming just on esports. So my hot take for them is to start an OTT, call it “The M”, and triple down on esports and business. And I’m sure they own a ton of other stuff that I don’t even know of that would do really well.

Strategy-wise it would be interesting too when you think about how OTT could work with their business as a whole. Like, what if they created the next “House of Cards” (aka a ridiculously popular show) and put “season 2” exclusively on the Surface? Could be a way to use content to drive their hardware business.

Could IBM’s Watson compete with Amazon Alexa and Google Home?

I only have surface level knowledge of Watson, but Watson feels to me like a true Alexa and Google home competitor. I feel like they could make a voice device that could humanize the Watson (i.e. Max Headroom – all you youngsters can Google that).

My thoughts are, if Watson’s so smart, why not make the voice device play? Because I think that will be one of the biggest plays and it would give IBM the opportunity to do to Google and Microsoft, Amazon, and Facebook, what they did to them. IBM could do it by winning voice.

How Samsung could win using the 8-mile strategy

Samsung was so dangerously close to winning. I don’t think people understand how much the youth loved them right before that phone went on fire. It was right there.

And I still think, deep buried in there, there is a underlining “Gen-Z” who are very open to embrace a non-Apple product in the US because Apple – to them – is the establishment. I think Samsung has the most permission.

They did a lot of smart stuff with Casey Neistat. I think that they need to go back to those roots – they’ve gone away from that a little bit because they went on defense with the phone on fire. If I were them, I’d go on offense. I would make a commercial that’s like, “yo, you think our phone was on fire last time? We’re really on fire now. Look at this.” I would literally come out with something called the Samsung Fire. I’d own the joke.

And that’s what I would do if I’m Samsung. I would literally come out with the best innovative phone we could possibly put out. Go Project Fire and then just own the whole fire story.

I think fashion brands need to really think about collaborations, youth culture, a lot of TikTok, and a lot of finding their Off-White, their Shaun,, their Kendrick, their Kanye, their Travis Scott, their Joey Fresh. They need to find collaborations.

For example, I think there’s a crazy collaboration with Calvin Klein and a male or female celebrity for their underwear, like we saw with Marky-Mark and Kate Moss back in the day. I think there’s a real heavy collaboration that could be done with whoever the next-generation cultural icons are – but not the way they’ve done it for the last 8-10 years where it’s like Justin Bieber or Hailey being the face of the brand. I’m talking about a true collaboration, where that celebrity / influencer has a say in how the product is made – like maybe we see a different kind of band on the product or maybe the pockets are different. Just something cool that comes out of a collaboration with the “creative director” aka the celebrity influencer.

That’s what I’d do. AND I would focus heavily on TikTok if I were Calvin Klein. The platform isn’t just for kids anymore and I think if you’re a fashion brand that targets anyone 30 or under, you should be spending a ton of time on TikTok.