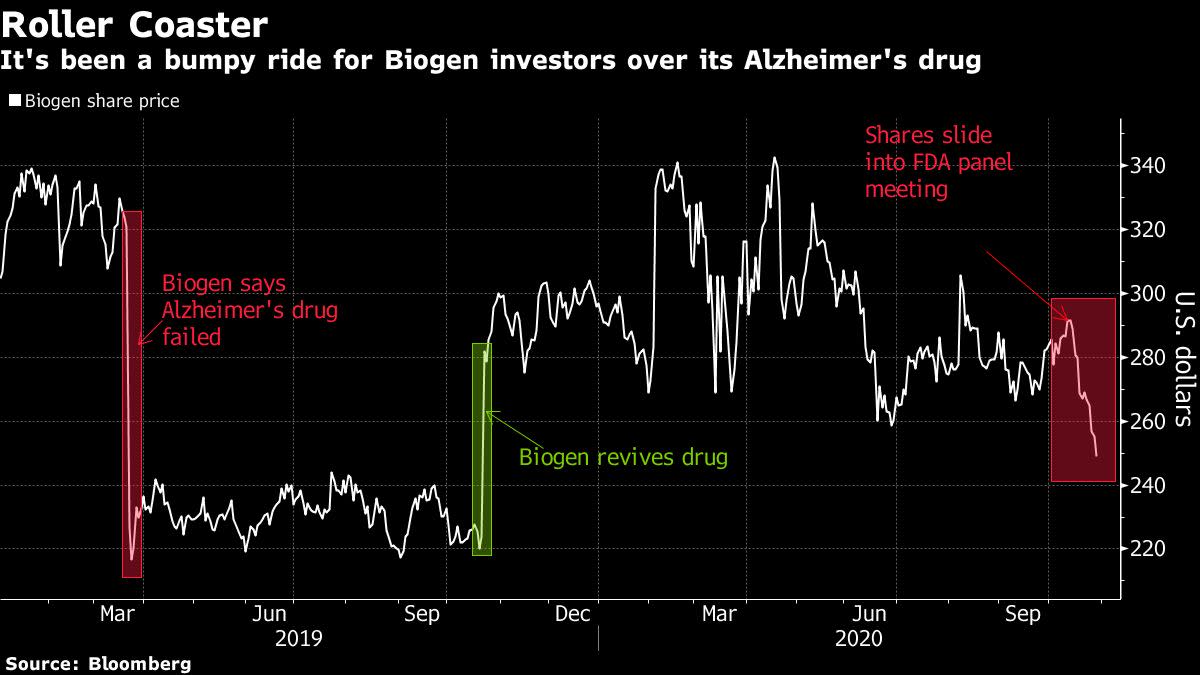 (Bloomberg) — Biogen Inc.’s big bet that U.S. regulators will approve its experimental drug for Alzheimer’s disease faces a key test next week when a panel of outside advisers reviews results from a pair of studies.

The Nov. 6 advisory committee meeting is a highlight of the year for health-care investors and a “major binary event” for the $38 billion drug giant, Stifel analyst Paul Matteis said. Briefing documents, which become public two days before the meeting, are likely to be a “bigger determinant than usual in dictating how panelists eventually vote,” he said.

Wall Street analysts have suggested Biogen shares could sink as low as $178, from about $245 now, if the panel pushes back on the biotech’s data package for the drug, aducanumab. Or the stock could surge as high as $335 if the advisers strike an optimistic tone and vote that the Food and Drug Administration should approve the medicine.

Biogen’s growth is “heavily dependent” on aducanumab, particularly following the launch of generic versions of its best-selling multiple-sclerosis drug and as its spinal muscular atrophy drug, Spinraza, faces new competition, Cowen analyst Phil Nadeau wrote. He expects the panel meeting will make shares move 30% in either direction immediately as the drug’s approval will dictate Biogen’s revenue path over the coming years.

Options in the drugmaker show expectations that are somewhat more muted, with bets implying shares could move 15% between now and the Nov. 6 panel. Contracts set to expire on Nov. 13, which would cover movement if Biogen elects to pause trading of its stock for the meeting, show a potential share move of 20%. The implied volatility for both expiration’s is over 128, which is more than four-times the three-month historical average of 32.

Failure to win approval will ratchet up the pressure Biogen management has been facing as it shunned any meaningful deal-making while continuing to bet on riskier experimental drugs.

Analysts have been mixed on the potential approval of aducanumab. Last week, RBC Capital Markets spooked investors when it said a mock panel resulted in a negative vote. However, a JPMorgan survey of 58 investors showed almost two-thirds of responders expect the drug to gain FDA approval.

The drug’s muddy history has sparked debate across Wall Street and among physicians and health insurers over the past three years. Biogen and its Japan-based partner Eisai Co. at one point halted research on the drug after disappointing results, only to revive it seven months later. Investors have been along for the roller coaster ride with shares trading between $216 in March 2019 and $383 eight months earlier.

The FDA is expected to make a decision by March 7, though Biogen has said it could act sooner — and many have argued a decision is likely on the horizon given the advisory committee meeting is coming about four months prior to the target decision date.

It’s worth noting that U.S. regulators aren’t obligated to follow the panel’s advice, however, they typically do when it comes to drug approvals.

The Alzheimer’s Association says more than five million Americans are living with the disease, and that could mean billions of dollars in sales for Biogen since there are currently no medicines available to slow its progression.

Wedbush’s Laura Chico predicts peak annual sales of $3.7 billion if Biogen is able to get the medicine approved — that would be worth $64 per share in her model. With the large number of U.S. patients suffering from the disease with no cure, Chico’s model leaves plenty of space for Biogen to ramp up sales. She also expects net pricing for the drug to be around $25,000 a year.

For more articles like this, please visit us at bloomberg.com