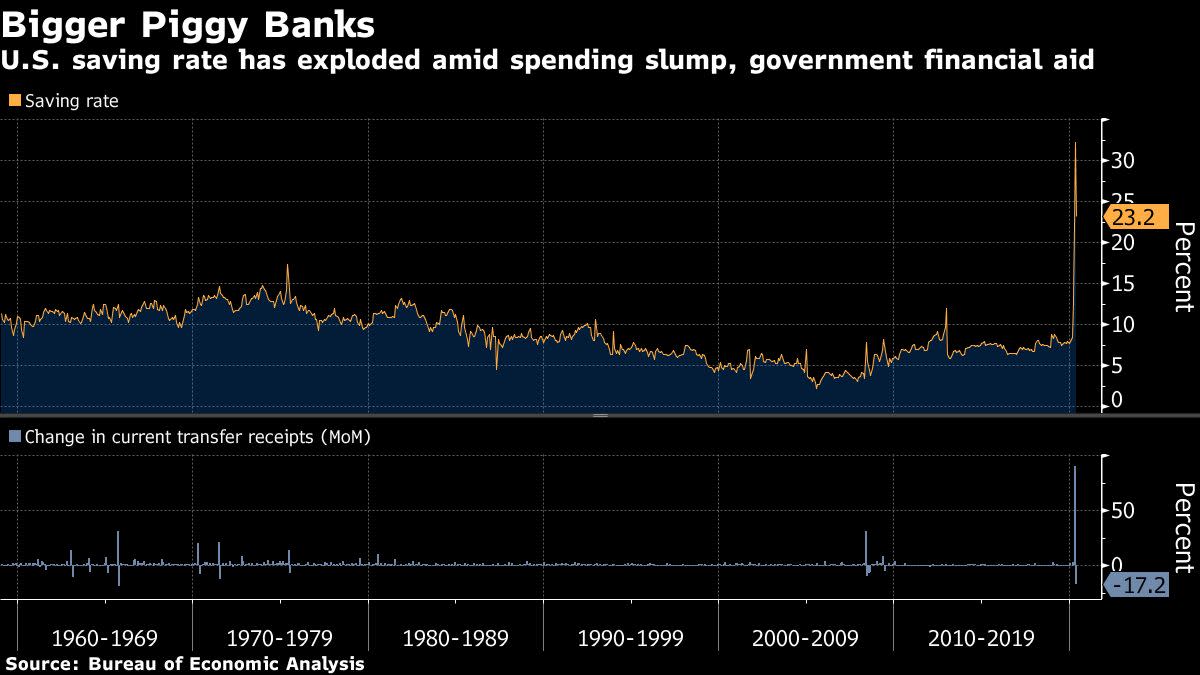 (Bloomberg) — Just like back in 2008, the Federal Reserve has pumped record amounts of cash into the financial system this year to stave off an economic collapse. But unlike in 2008, when that money mostly piled up in banks’ accounts at the Fed, funds are pouring into Americans’ checking accounts.

And that’s a big distinction.

When kept at the Fed by banks as excess reserves, the money fails to give the jolt to the economy. But put it directly in people’s pockets — which occurred this time because Fed support was matched by government stimulus — and the potential boost suddenly becomes meaningful.

The numbers are eye-popping. In the three months through May, the most liquid portion of the money supply, as measured by a gauge known as M1, surged 26%.

That’s triple the jump posted in the corresponding three-month period in 2008 and is more than any full-year increase recorded in the six decades that officials have been tracking the data.

The question now is whether Americans really do go out and spend that money as the country — slowly and in fits and starts — reopens for business.

There are those, like University of Pennsylvania Professor Jeremy Siegel, who answer with a resounding yes and envision a boom in consumer spending in months ahead that will power economic growth and spark inflation in 2021.

Others worry the exact opposite will occur, that Americans, unnerved by how the unemployment rate has soared amid the pandemic, will opt to hoard that money as rainy-day savings and, in the process, throttle the recovery.

The economists in this camp clearly outnumber those in the Siegel group. Whatever the case, one thing is clear: There are few, if any, factors more important in determining the pace of the U.S. rebound than the fate of this cash.

“If the savings rate remains elevated then growth will be impaired,” says Yelena Shulyatyeva at Bloomberg Economics. “The biggest worry is that consumers will not restart spending.”

It sounds odd in the throes of the worst economic catastrophe since the Great Depression that Americans, on paper, have more money on hand than they have in years. Recessions make us poorer, and more than 40 million people in the U.S. have lost their jobs at some point during the pandemic.

But the federal government has taken huge steps to replace lost income. Since March Congress has approved more than $2.8 trillion in aid, including significant amounts sent directly to households — all while the country has been on an enforced consumer diet with retailers, restaurants and other businesses shuttered.

In April, the U.S. personal savings rate — the percentage of disposable income that households manage to sock away — jumped to 32.2%. Before Covid-19 in records that date to 1959, that number had never exceeded 17.3%, and had cleared 10% only once since 1995. Fresh monthly data from the Commerce Department Friday showed the savings rate subsided to the still-lofty level of 23.2% in May.

On top of that, companies facing deep uncertainty have drawn on revolving lines of credit to the tune of more than $200 billion, according to Morgan Stanley. Other firms have been able to tap bond markets. Very little of that credit has gone to new projects or investments.

“If you’re a business, do you invest now or wait and see what the state of the world is in a few months?” says Neil Shearing, group chief economist at Capital Economics.

The flood of money has been made possible by the Federal Reserve’s aggressive response to the pandemic. It’s purchased more than $1.6 trillion in U.S. Treasuries since early March, effectively financing more than half the government stimulus. Its emergency lending programs have also kept credit flowing to companies, sometimes directly but more often by reassuring traditional lenders that markets will stay liquid.

The U.S. isn’t alone. Central banks and governments in developed markets around the world have been feverishly printing and distributing money to prevent companies and families from going under. And in those places as GDP has swooned, bank accounts have swollen.

Siegel’s reaction is the classic response by an economist trained to pay close attention to money aggregates. In a June 16 podcast with Bloomberg Opinion columnist Barry Ritholz, he recalled Milton Friedman saying bank reserves are good in a downturn because they stimulate the economy.

“But if those excess reserves get pushed into either M1 or M2, they’re going to be far more potent, far more potent, and that is exactly what is happening this time that did not happen last time,” he said, referring to central bank actions during the Great Recession.

He went on to worry that next year the U.S. will experience a spending boom, adding “for the first time in over two decades, we’re going to see inflation.”

By Siegel’s own admission, he’s in the minority among economists.

For starters, others say, government support for the unemployed is likely to at least shrink at the end of July when benefits approved under the CARES Act expire. Beneficiaries, if they have been able to salt anything away, are going to start tapping reserves just to get by.

Moreover, if there is a surge in spending, and even if it spurs prices higher, it will be temporary.

Roberto Perli, a former Fed economist and partner at Cornerstone Macro LLC, says a true episode of higher inflation, one that persists, would require a structural change in the economy.

Any resurgence is likely to be limited by the simple fact that some demand will never be made up.

Delayed purchases of business attire and a new car may be realized once the economy is back to normal, but an office worker commuting into a city from her suburban home won’t be buying three months’ worth of train passes, or filling up her car with several tanks’ worth of gas.

Something worse could come if a constantly re-emerging virus causes fear and uncertainty to alter consumer behavior in a lasting way. Instead of spending their reserves even when the coast is truly clear, households may think twice and turn involuntary savings into more permanent, precautionary savings.

“There’s a behavioral aspect to a recession,” said Julia Coronado, president and founder of MacroPolicy Perspectives. “It’s not just about the actual shock. It’s about the loss of confidence that becomes a self-reinforcing drag on the economy.”

The economic drag would also land hardest on the unemployed whose best chance of returning to work is a resurgence in shopping, dining, travel and entertaining. Workers in retail and hospitality were also already disproportionately low-income and minorities, meaning issues of inequality will only be exacerbated.

“Everything should be geared toward getting those who have come out on the right side of this to have the confidence to go out and spend,” Shearing said.