Where are the marketing results?!

Okay, probably not what your Valentine’s date cares about. But if you’re a marketer, you might be interested in merging the most lovey-dovey of days with your marketing. But how?

Well, these companies have figured out some creative ways to leverage the warm and fuzzies (or unadulterated rage and crushing loneliness … whatever) that Valentine’s Day instills in people. If you don’t have a marketing campaign planned for the 14th, maybe some of these will inspire you to get in on some last-minute Valentine’s Day action. Pun totally intended.

The carousel post then highlights actual photos from iconic movies like, “When Harry Met Sally.” In the post’s caption, it encourages Instagram audiences to guess which movies are being referenced.

While the real dog’s mimicking Lady and the Tramp grabbed attention, especially from the animal lovers on Instagram, this post’s caption and other photos encourages audiences to interact with the brand by guessing which movies are being referenced.

This is both a fun way to boost brand awareness, and leverage the holiday to gain engagement on social media.

In 2018, Panera tweeted that customers who got engaged in one of their restaurants on Valentine’s Day could win free wedding catering from the chain.

The tweet included a short and simple video which announced the promotion and showed two Panera employees cheering, as if they were witnessing a proposal.

Love is in the air. This Valentine’s Day, get engaged at a Panera and we might cater your wedding, for free. #PaneraProposalSweeps https://t.co/mpL5VbjSOd pic.twitter.com/VPRzu0QLNd

This is a quick and sweet way to leverage the holiday and social media to gain foot traffic into a physical business. Although Panera is a giant corporation, this campaign strategy is so simple that smaller businesses could create something similar with a tweet, short video, and offer that drives foot traffic.

Just before Valentine’s Day in 2018, Facebook Messenger’s Twitter announced that if you shared that you were “In a Relationship” with a friend you were messaging, celebratory hearts would rain down in your Messenger thread with that person.

Although a small business probably can’t add a major feature to their product just because of a holiday, this is a good example of how you can theme something related to your product, such as your website, around a holiday temporarily.

Another thing that’s interesting about this campaign is that Facebook is using a competing social platform, Twitter, to announce this new feature. This slightly undermines Twitter, which also allows direct messaging but with less interactive features.

Burger King is no stranger to poking fun at its biggest competitor, McDonalds. This was no different before Valentine’s Day 2017 when they created an “Adult Meal” alternative with a similar box shape to McDonalds’ kids’ meal.

In the ad, Burger King explains that Kids’ Meals are for kids. But, on the night of Valentine’s Day, Burger King customers can buy an adult meal with an “adult toy.”

This campaign is pretty cheeky. However, it’s edgy mission and subtle comments about its competitor’s product make it memorable and funny.

On-demand car service company Uber launched a Romance on Demand campaign in most of the cities where they operate. Take a look at the short, cute video they shot to explain the campaign:

If you didn’t watch the video, the gist of the campaign is this: You can request roses be sent to a special someone by selecting the “rose” in their app. You set the delivery location, and a black car arrives at that location with a driver totally suited-up to deliver a bouquet of roses.

Uber is a startup that’s figured out a way to create a campaign that delights its audience and drives additional revenue for its business — all without a tremendous resource investment. I mean, their drivers are already on the road, ready to take customers; but if there are Uber customers who don’t need a ride but totally need to send some flowers, and send them with style … well, let’s just say transporting roses at a premium price isn’t much different than transporting people. Except the margins are way better for Uber. Pretty impressive stuff.

And even better, they’re using inbound tactics to get the word out there! They launched the Romance on Demand campaign on their blog, via social channels with the hashtag #romanceondemand, with that adorable video you might have watched up above, and even by establishing local partnerships in the cities where they’re running the campaign to enter participants into a drawing to win some extra goodies. This is a low cost, high return campaign for Uber that totally aligns with its customer persona — high convenience and high style.

MegaRed is a type of krill oil supplement sold in nutrition stores. If you don’t know already, fish oil is an excellent dietary supplement for those concerned with heart health, so it makes sense that its Valentine’s Day campaign theme is “Whose heart do you love?” Here’s how it works.

MegaRed is relying heavily on Facebook to facilitate this campaign, in which visitors can request free samples of their supplements through their Facebook app. What’s totally endearing about this campaign is that you can request the supplement for “The heart of someone you love.” In other words, you can give someone you love — whose heart you want to keep in tip-top shape — a free sample of their product. Even better? If you choose to give the free sample to a loved on, MegaRed will give you a free sample, too. And the love doesn’t end there: If they can reach 100,000 free samples given away, they’ll donate $100,000 to the National Coalition for Women With Heart Disease.

Aside from the great feeling this campaign instills — I mean, promoting heart health is kind of hard to argue with — I love their use of social media to get the word out there. For instance, on Twitter, MegaRed is seeing celebrities like Joy Bauer and Toni Braxton posting about the campaign. Pretty impressive. And on YouTube, there’s this fun, short, touching video that will, forgive me, but totally touch your heart:

This campaign is being handled by an agency, but one thing that made my heart smile is a quote from MegaRed’s CMO, Jennifer Steeves-Kiss, to the New York Times. “We want to start making digital and social a significantly greater priority for us,” she said. “People are spending four to five hours a month online researching supplements if they’re supplement enthusiasts,” Steeves-Kiss shared, and additionally, they are in the middle of an acquisition by a company whose executive are “great proponents” of social and digital marketing.

We can’t help but smile at seeing the adoption of inbound methods by brands that have millions to spend on traditional advertising methods!

7. “Show Your Love for the Jersey Shore” – The State of New Jersey and the SBA

The State of New Jersey, along with the Small Business Association, are running a pro-business campaign called “Show Your Love for the Jersey Shore.” The call-to-action for the campaign? To spend your vacation dollars — particularly on Valentine’s Day — at the Jersey Shore. It’s being promoted on Facebook, Twitter, via email, and via live events in partnership with destination marketing organizations. Information about special promotions being offered by shore businesses will be shared socially, too, so if you’re looking for something to do tomorrow, check it out 😉 For instance, you might be interested in …

Doo Wop with the one you love this Valentine’s Day at @countbasiethtr. bit.ly/UEXOPf

I know I sure would be!

The goal of the campaign is to show that the Jersey Shore is open for business after the devastation of Hurricane Sandy. The problem some shore businesses are facing is the perception that businesses aren’t recovered from the storm. While there’s still much more recovery to be done, there are some businesses that are, indeed, ready to accept tourists. They just need the word to get out there.

Director of Jenkinson’s Aquarium, Cindy Claus, told NorthJersey.com, “I think so many people see on the news that we got hit by the storm. They see all the destruction, and yes, there’s a lot of destruction and a lot of sadness, but there’s a lot of businesses that were able to get opened. And you need to come back because that’s the only way these businesses are going to survive.” The aquarium was able to open back up on February 1, and is hoping this campaign will help get the word out there that they’re welcoming visitors with open arms.

Whether the campaign works or not remains to be seen, but it’s fantastic to see federally funded institutions finding a way to, essentially, newsjack as a way to aid the shore community — particularly affected businesses — in attaining their previous levels of visitors.

Scribbler, a UK-based personalized greeting card service, has won my heart because of its celebration of content in its Valentine’s Day campaign. Using their blog, they’ve asked their audience to share what their definition of “love” is. All you do is visit their blog, and answer these three questions: 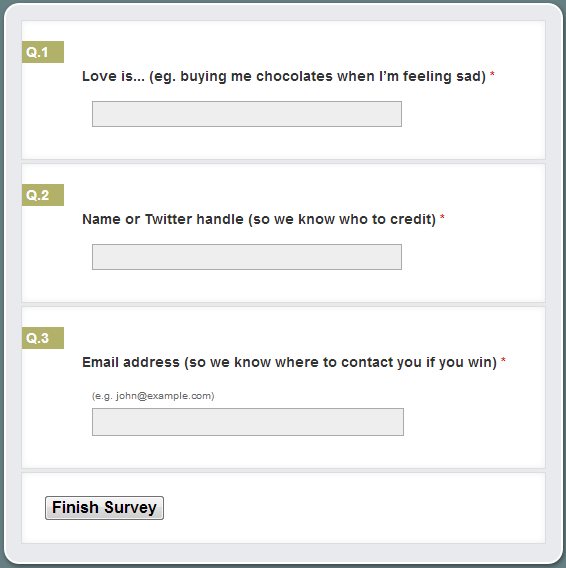 Or, you can tweet your response to the Scribbler Twitter account. The winner will get a free iPad mini, and the best answers will be compiled in their Valentine’s Day ebook. To inspire people, Scribbler is also using Facebook and Twitter to post some of the best answers that are coming their way. This campaign is fantastic for a few reasons:

This campaign is an excellent idea for anyone trying to expand the top of their funnel — campaigns with a low time commitment but high level of delight are great ways to make new fans that you can later nurture into customers. 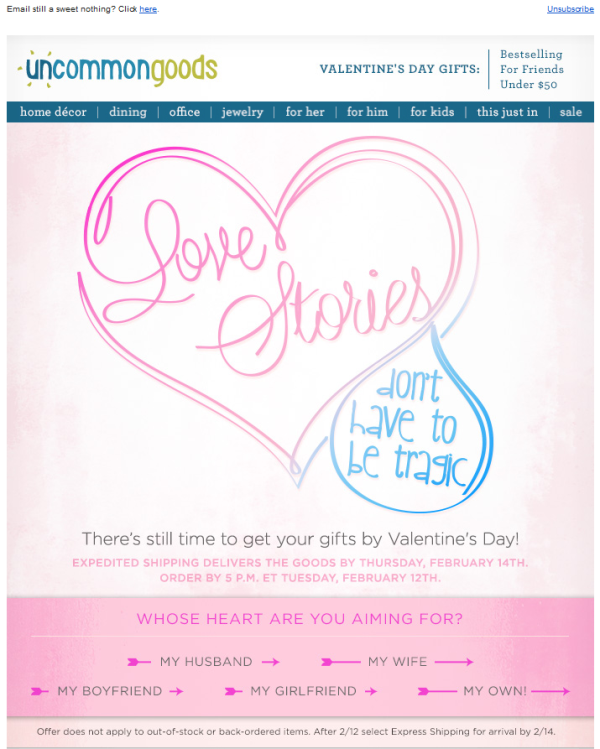 First of all, one of the great things about all of UncommonGoods’ emails is their attention to detail. For instance, they tied the Valentine’s Day theme into more than just the design and theme of the email campaign: Take a look at the little tiny text at the top left of the email to see what I mean. Instead of just saying, “For an HTML version of this email, bla bla bla,” they said, “Email still a sweet nothing? Click here.” Love is in the details, as they say.

But the layout of the email also makes taking action super easy for the recipient. Notice how they’ve divided up the gifts, essentially, by persona. “Whose heart are you aiming for?” they ask — at which point you can click on the person you need to shop for, and be brought to a landing page with content that aligns with your need.

But you know what takes all this to the next level? The fact that UncommonGoods finds a way to incorporate blogging into all of this! If you visit UncommonGoods from this email, you’ll see the following (pay particular attention to the orange call-out):

Not only does the design from the email align with design on the website, but when you click on the parts of that little box — let’s say you’re looking for gifts for your girlfriend — you get taken to a blog post of the top ten gifts for girlfriends, with a picture of that gift, a fun and well-written description of that gift, and a CTA to make the purchase next to each gift. 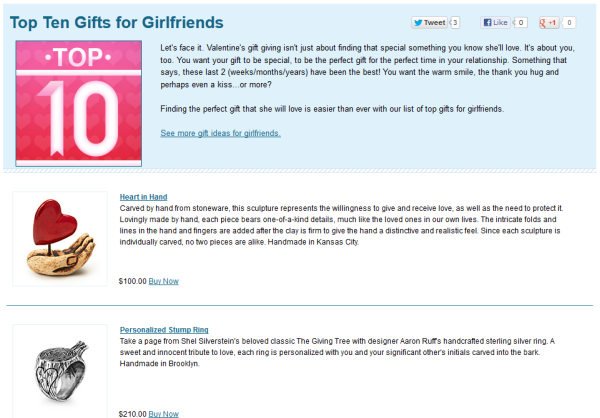 Nothing like integrating your marketing channels to sweep a marketer off her (or his) feet!

Editor’s Note: This blog post was originally published in Feb. 2013, but was updated for comprehensiveness on January 30, 2020.