Each year, marketers, tech writers, and overall online enthusiasts await the release of the 2018 Internet Trends Report: an annual presentation by Kleiner Perkins Caufield & Byers partner Mary Meeker, covering the year’s most pivotal statistics and trends in the online realm.

The report, while citing key data points — growth in certain areas of internet use, online shopping trends, and indicators of the future of the workplace — is exhaustively comprehensive. Meeker leaves no stone unturned, identifying numerous pivotal areas where online user behavior is changing, and where investors, marketers, and others should take note.

The full presentation — which took place earlier this week at the 2018 annual Code Conference — can be viewed here.

And even though Meeker’s report covers an impressive amount of ground, the information and insights it contains often end up raising additional questions. If the current is true of X, then what does the future look like for Y?

Here are a few key questions we have about the 2018 Internet Trends Report — and what the future of tech looks like.

1. The time internet users spend online has increased, but when it comes to the number of new internet users, growth has significantly slowed. Does the future of growth reside in ways for people to connect, rather than getting more people online?

According to Meeker’s report, 2017 saw 3.6 billion internet users globally: a total that amounts to more than half of the world’s population.

“When markets reach [the] mainstream,” she writes, “new growth gets harder to find — evinced by 0% new smartphone unit shipment growth in 2017.”

In other words, with the internet becoming more accessible to more people, growth among new users slows. However, among those who are online, the time spent there has increased. 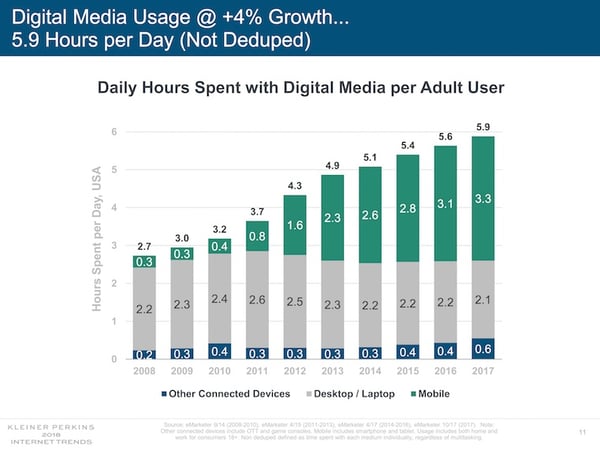 It’s what HubSpot Head of SEO Victor Pan says is called the “last mile problem”: a term often used for supply chain or transportation to describe the final leg in the process of delivering a good or service to end consumers. That “last mile,” as the saying goes, is typically the least efficient step and said by some to be the most expensive part of the delivery process.

It applies to global internet access, Pan says, “because getting the internet to the last part of that population is really expensive,” largely because of its location in areas that are what he describes as “far and sparse.”

Where any product is available in a limited capacity, costs increase. “The remaining areas of the world without internet access are likely less able to afford it,” Pan explains. “In that case, you see the overall growth of internet users slowing down.”

What we’ll end up seeing, Franco predicts, “is a greater investment in more ways to connect existing users, rather than getting new users online.”

But even so, focusing innovation on new ways to connect people, rather than getting more of the population connected in the first place, is not without drawbacks, he says. “That could exacerbate skill, knowledge, and privilege gaps that already exist as a result.”

2. If the answer to Question 1 is “yes,” could this trend be a “golden ticket” for emerging technology like virtual reality, which has struggled to get a strong foothold in consumer and business markets alike?

“Let’s assume the answer is ‘yes,'” Pan says. “The golden ticket isn’t actually virtual reality … but rather, a decreased cost for internet access as competition and alternatives increase.”

So the future of growth, then, could be less about the new ways the large volume of people who are already online will start to connect (or the emerging technologies that will support them) — and more about better options for access.

It brings up the question of technology like 5G, which, while considered emerging, is more concerned with better connectivity options than the more niche tools — see: VR — that are “added benefits” of being online.

At this year’s Mobile World Congress, for instance, 5G dominated many of the discussions and presentations, with multiple mobile device manufacturers and wireless providers battling to be the top provider of this new type of connectivity. The “G” stands for generation, in that this is the fifth generation of this type of connectivity. Currently, 4G powers cellular connectivity like LTE. 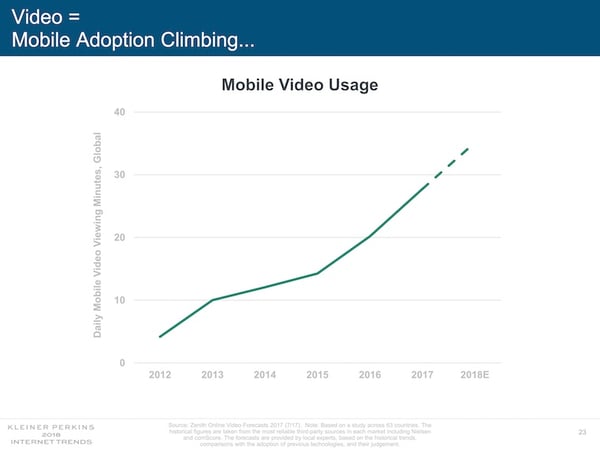 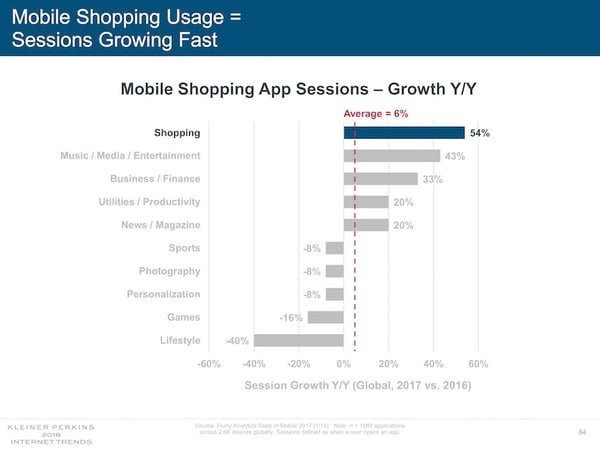 And while developing new technology to improve the experience of a growing mobile-first base is crucial, Pan wonders if even that’s moving too far ahead of the “last mile” too quickly.

“Most of the people reading this report, I imagine, are in first-world countries and take 4G granted,” he says. “Most of the world connects to a 3G connection — which may lead to poor mobile video streaming experiences, because it’s cost-prohibitive. Costs need to come down for user behavior to change.”

3. Meeker speaks to the “privacy paradox”: that as innovation becomes a broader channel for growth, it involves a higher degree of personalization that can inevitably require personal user data. Can there be innovation with regulation?

Data privacy has been a widely-discussed and contested topic as of late, ranging from revelations of personal Facebook data misuse by third parties, to the General Data Protection Regulation (GDPR) coming into force last month.

Often, this personal data is used for a purpose that the name suggests: a personalized experience. Facebook, as the company’s executives have long used as a defense, leverages data and information provided by users to personalize the ads and other content they see in the News Feed, for example.

But as the subject of data privacy becomes more front-and-center, especially amid these current events, many consumers are debating the value of privacy over a personalized experience. Meeker calls this the “privacy paradox.”

“Many usability improvements are based on data – collected during the taps/clicks/movements of mobile device users,” writes Meeker. “This creates a privacy paradox … Internet Companies continue to make low-priced services better, in part, from user data. Internet Users continue to increase time spent on Internet services based on perceived value. Regulators want to ensure user data is not used ‘improperly.’” 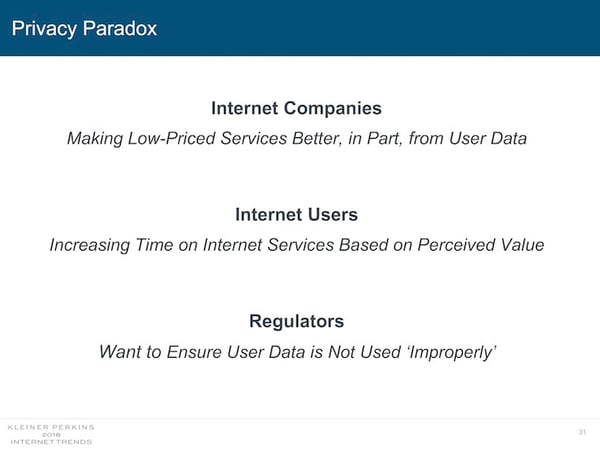 The possibility of regulating personal data (and the Big Tech companies that are often in possession of it) within the U.S. has also been a frequent topic of discussion this year, regardless of how likely it actually is. Facebook CEO Mark Zuckerberg testified before Congress in two days of hours-long hearings in April, and appeared before European Parliament in May.

But regardless of what these appearances are worth, they do raise the question: Can there be innovation with regulation?

“Meeker’s slides tell a compelling story about the lack of general adaptability of U.S. laws towards tech,” says Franco. “Our data laws are more than 43 years out of date — especially as compared to Japan, Korea, and the EU, which have all gotten updates in the last year or so.” 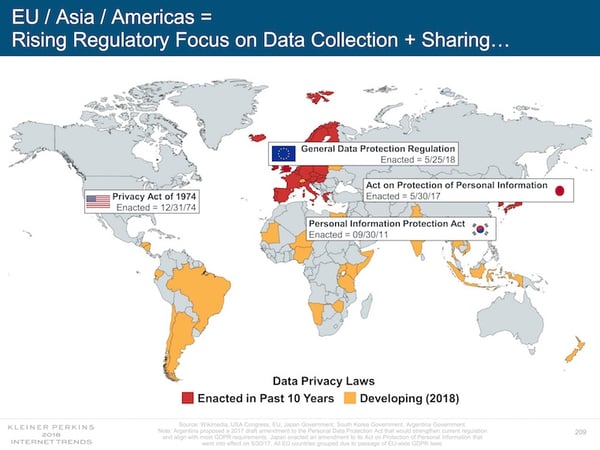 Pan, for his part, says that there’s a global struggle to find a balance of the two.

“There two ends of the spectrum,” he explains. “One, the government has a hand in all that private data — like China, or even the U.S. with the PRISM program,” the latter being the collection of online communication activity by the National Security Agency, which made headlines when whistleblower Edward Snowden leaked information on the program and was forced to flee the country.

On the other end of the spectrum, Pan says, there are regions like the European Union, “where data privacy is heavily regulated to protect consumers.”

So, is there a balance — a middle ground along this spectrum — in the future?

“I think there will be innovation there,” says Pan. “I can imagine web hosting companies collecting, handling, and keeping personally identifiable information secure and data privacy compliant to their respective countries — for a price.”

The idea of “data protection for a price” is not new, nor is it tremendously popular, according to our research. When we surveyed a panel of 893 consumers — almost evenly divided among the U.S., UK, and Canada — to find out how many would pay for an ad-free version of Facebook, 64% said “no.”

But knowing how this will impact innovation and the industry at-large, Franco explains, would require a side-by-side comparison of what these varying levels of regulation look like — especially in the months following GDPR coming into force.

“That would make a really interesting case study,” he says, “on the impact on innovation of self-regulation, versus government regulation of tech companies.”

4. What, if any, is the psychological impact of the growing amount of time we spend online?

Finally, we revisit the trend of those who are already online spending more time there. According to Meeker’s report, the average number of daily hours with digital media (among online adults) increased 4% in 2017.

The debate over disconnecting is also not new. As we spend more time on our devices, there’s a market for getting away from them, with some organizations advertising, essentially, digital detoxes for hire.

This growing amount of time online is particularly true of time spent on social media, according to the report, with the average global daily minutes spent on such networks increasing by 50% between 2012 and 2017 — for users ranging as young as 16, and as old as 64. 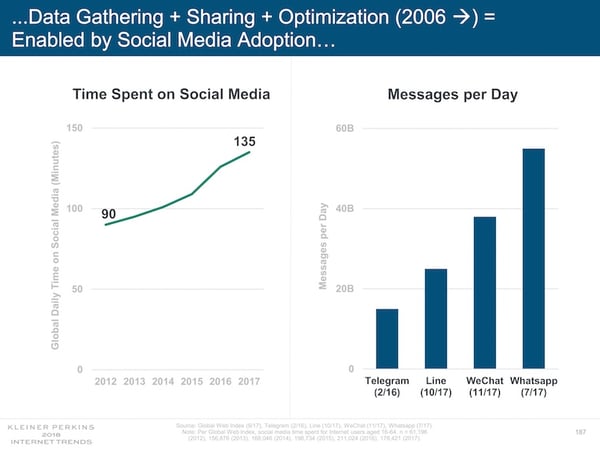 It begs the question: What is the psychological impact of this behavior?

“A lot of teens who come to me for therapy often cite social media as a source of stress,” says Laurie Paul, Ph.D., a psychologist in the Washington, D.C. area. “Many of them talk about inter-personal conflicts with peers that are started or intensified by posts on social media.”

“I’ve had many teens talk to me about experiencing bullying from peers on social media, and that this causes a lot of anxiety,” she says. “Skipping school, changing friend groups, entire school years ruined — because of being a target of bullying on social media.”

It’s not limited to teens, either. When I asked Dr. Paul if she’s observed similar effects among adults, the answer was, “Yes.”

“I’ve also seen conflicts among young adults that started on social media,” she elaborates. “For example, around Father’s Day, I had several clients who were upset, because one of their siblings posted about how wonderful their father was, but in actuality, the father abandoned the family or was abusive.”

“These posts led to resentment, feeling invalidated, and sparked conflict with the sibling who made the post,” Dr. Paul explains. “Sometimes, it sparked broader conflict and taking sides among several members of the family.”

So with this concentrated amount of time spent on social media being a fairly recent phenomenon — with the most explosive growth, it seems, having taken place over a period of only five years — what are the possible long-term impacts?

“I can only hypothesize. I teach college classes, too, in addition to my clinical practice, and I’ve observed short attention spans,” says Dr. Paul. “I wonder if this is related to students spending a lot of time online and being able to rapidly click until they find something interesting.”

Until next year’s report — we’ll continue to observe the gradual impact of these trends, and how they evolve.